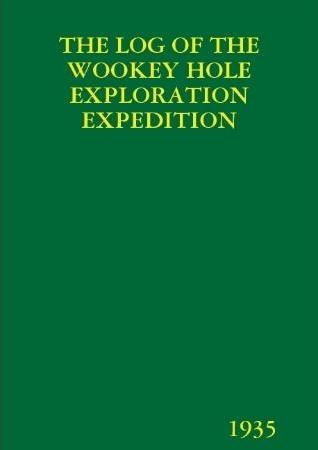 In the summer of 1935, a group of intrepid cavers mounted an assault on the famous show cave at Wookey Hole beneath the Mendip Hills in England.  From an historical perspective, this was one of the earliest attempts by amateurs to explore underwater cave passages using diving equipment. Self-contained underwater breathing apparatus was in its infancy and not available to them, so they had to adopt bulky base-fed standard diving dress.  The results of their work were published in the grandly titled 'The Log of the Wookey Hole Exploration Expedition 1935' which was prepared and printed privately by the leader of the venture, Graham Balcombe.

Balcombe's account of the publication of the book is given later.  Only 175 copies (at 7 s 6 d each) were produced, and these have become something of a collectors' item – often exchanging hands for several hundred pounds.  In his memoirs, Balcombe notes:

"That 'The Log of the Wookey Hole Divers' now commands such a considerable price in the market is no recognition of intrinsic merit but of the tremendous success of those who followed in our footsteps and then broke out to do much greater things; 'The Log' basks now in their glory."

In the same text, Balcombe also explains that the exploration of Wookey Hole Caves came about by accident rather than by design.  Balcombe, 'Digger' Harris and Jack Sheppard were involved in trying to extend the swallet cave of Swildon's Hole at Priddy, high on the Mendip plateau above Wookey Hole.  At the time, it was not known for certain that the cave was a major feeder to the River Axe which emerges at Wookey Hole (rather it was thought by some that Swildon's Hole drained to Cheddar).  By 1921, the cave had been explored as far as an ominous looking pool where the way on lay below its surface.  Blasting the obstruction had been to no avail and diving had been attempted.  Ever the inventor, Balcombe fashioned a 40' long snorkel using hose pipe and components from a ladies' bicycle frame.  This too was unsuccessful (and nearly fatal), so an approach was made to Siebe, Gorman & Co., the submarine and safety engineers, for the purpose of obtaining the latest in diving technology.   Jack Sheppard visited the company's owner, Sir Robert Davis, to explain the need for lightweight equipment appropriate for the confines of Swildon's Hole, but there was nothing suitable.  Instead, Balcombe took up Davis's offer of their standard diving dress equipment and the services of an instructor, and found a site that could accommodate such paraphernalia: Wookey Hole Caves.

Thus the scene was set for the events recounted here.  As has been mentioned, original editions of 'The Log' are an expensive rarity.  As we approach the 75th anniversary of the first cave dives at Wookey Hole, it is fitting to make this record more widely available by means of a reprint.  This has proved no mean feat in itself, as much of the original text had to be retyped from scratch using Balcombe's un-numbered file copy left to the Cave Diving Group library as its source – this incorporates handwritten notes added by the author.  I am indebted to the CDG librarian, Martin Grass, for entrusting me with this priceless tome.  Every effort has been taken to make this version a close facsimile of the original – including its idiosyncratic (to the modern eye) punctuation and inconsistent capitalisation of chamber names etc. which are often changed in modern transcripts. Supporting material from Balcombe's archives has been added to further enhance the story. These were kindly provided by John Freeman from the records of his late father-in-law, Edmund Douglas, a close friend of Balcombe. Finally, an epilogue has been included to bring the story of The Divers and the exploration of the cave up to date.