Colin is the epitome of a Fish award winner if you look at the requirements:

“This is awarded annually to a member who has made a significant contribution to the CDG. Whilst the nature of the contribution is not precisely defined, the guiding principle is that the individual should have served the CDG rather than any other organisation or themselves.”

Colin has worked hard in the background for both the group nationally and for the Derbyshire section. His work on the last edition of the CDG manual should not be underestimated. Colin has worked  on both the written exams, practical exam and standards to the benefit to the group, as well as his work on training within the Derbyshire section. I have known Colin way longer than either of us would admit to. As well as UK diving Colin has fitted in many trips to France and Spain. In that respect Colin has not only been invaluable with CDG documentation and training he has also been an active cave diver pushing caves . Including a long time dig in Tucks rift, south Wales. Leading to the discovery of “Insane in the Membrane” series by a rather awkward low passage (hence the name).

On one dive I (AMW)  became hung up by a battery pack struggling to free myself, Colin waited patiently on the wrong side of the restriction (watching his contents gauges) while I sorted out the issue. Or possibly he was working out how long it would take to hack his way through me with a dive knife!

Long term digs beyond sumps seem to be Colins preference, digging beyond Ink sump in Peak Cavern helping Jim Lister being another. Colin also undertook a long solo project in Grey Wife which not only involved awkward caving and diving but quite a long walk to get to the site showing a determination to move the cave forward.

A worthy winner of the Fish Award if ever there was one. 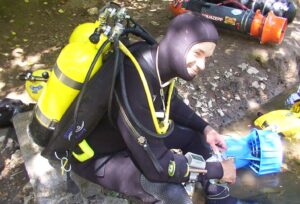