At the 2018 AGM the Fish Award was given to David Brock. David has served the CDG as Secretary for many years, and in that time he has expertly guided the Group through many constitutional issues, and has spent countless hours on onerous tasks which enable the Group to modernise and adapt to changing social and legal climates, and continue to provide the best possible support, training and organisation of a diverse group of highly skilled, motivated and at time opinionated group of individuals. Dave does this with quiet uncomplaining efficiency for the benefit of us all.

His work following the death of Colin Pryer in 2005 “A Quantitative Analysis of Fatal British Cave Diving Incidents from 1980 to 2005” and development of the CDG risk assessment system was a high quality and appropriate response which both protected the Group, and helped divers consider their activities in a more abstract form.

All this is in addition to Dave’s record as a caver and cave diver, but the Fish Award is given specifically in recognition of work directly for the CDG, and as such Dave deserves the greatest thanks and applause from us all.

Unfortunately Dave was not able to attend the AGM this year (the organisation and administration of which is another task he usually carries out) so the award was made over the phone from a fire escape outside the dinner room; the award itself is on it’s way south by ‘caver post’.

When I was awarded the Fish Award last year, I was firstly hugely surprised, and then greatly flattered when I considered the other holders and their qualities and records. To stand in that company is something I am humbled and honoured by.

So, on behalf of the Cave Diving Group, and the previous holders of the Fish Award – John Buxton, John Cordingley, Clive Westlake, Andrew Ward, Duncan Price and Dave Ryall, thanks Dave, and I hope the award and the company you now keep is something you will enjoy, value and feel it is some small measure of thanks from a grateful CDG. 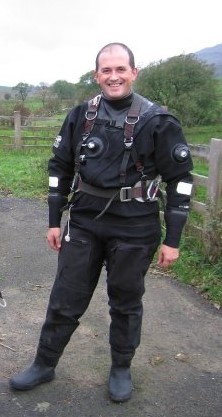